Word for the Week - Happenstance!

Happenstance.  That’s Andrew Thornton’s word for the week this week.
Made me think – Then it hit me. Life, that’s pretty “Happenstance”,…if you think about it.
Here’s a little story of “Happenstance”.

My niece was 24 years old, newly married with a 4 month old son, living on a Marine base in with her hubby when she was diagnosed (after months of “what’s wrong w/me” doctor visits) with Hogkin’s Lymphoma.
As she’s going through her rounds of chemo, she’s gaining weight, feeling so tired she can barely pick herself up off the floor and her white blood cell count was way down – so much so that she had to skip a couple of chemo treatments and give herself these awful shots in the tummy (I think they looked awful, she did them like they were nothing!!) to get her blood cell count back up.
Finally, back on her chemo schedule, the hubby is due to deploy to in a few months and will miss the rest of her chemo, their son’s first birthday, and her radiation treatments as well.  But, she’s a strong woman and decided this was great because when he returned, she would be cured of cancer, everything would be over with and they could get on with their happy lives!  (very positive outlook on life this one has!)
So, she goes in for another pet scan and the doc calls them to say,…. “Well, you’re responding very well to your treatments but we found something unusual with the pet scan.”  Her and her hubby’s heart sank. “What?”
The doc tells them “You’re pregnant.” “What!?”  “We found a fetus and this is why you’ve been gaining weight and why your nausea has been so intense.” (ya think?!!)
“We need you to come in and let us run some tests, and just so you know, we don’t expect the fetus to have a heart beat”  “Seriously – how can I be pregnant – wasn’t I checked for that prior to my treatments?”  “Um,...we overlooked doing a pregnancy test on you because of everything else that was going on, even though we told you we were going to do one.”  OOPS!
Tears and a whirlwind of emotions later, her and the hubby go in for tests and wow, by “happenstance” there is a heart beat – a strong one.  And, this little ‘girl’, well, she’s a fighter!
It’s not good to have chemo treatments in your first trimester of pregnancy because of the development of the baby, but this little one, well she was forming all the right things just as her Mama had to give herself those awful ‘tummy shots’ and missed the chemo treatments at exactly the right time to let “little girl” form all the right things!! Yep – that’s pretty “Happenstance” if you ask me!  Or divine intervention of some sort!

Fast forward:  Hubby deploys, Mama and baby finish up with all the chemo and then during the break between chemo and radiation little “Miss Layla” is born – completely healthy, all fingers, toes, etc. in place and perfect! No neurological damage can be found – all is great!
Mama completes radiation just a couple of days shy of the return of her hubby and with kids in tow, she greets him with delight!  Meeting his daughter for the first time and seeing his now 1 year old son and holding his ‘cancer free’ wife - yeah, that must have been something else!!
So, little miss ‘angel baby’ is full of life, loves to jabber, smiles all the time, loves wearing jewelry and playing with shoes and just turned 1 year old a couple weeks back.

To me, she’s complete and utter “Happenstance”:  (n) – meaning chance event, happening, circumstance or occurance. Yep  - that's Layla!!  She’s the ‘chance’ little one who, against all possible odds, came into this world and already you can see that’s she’s grasping life with both hands and taking it for a wild ride!! World,......Look Out!!
Posted by Shel 6 comments: 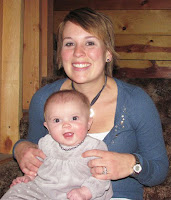 Okay - I just couldn't resist. My cute little great niece, Layla, (who's Mommy is one of our MiShel Designs Models!) has joined the "Pearl Girl" ranks and is sporting her own set of Pearls!
Layla is wearing Freshwater Cultured Pearls with Swarovski Crystals hand knotted on 100% silk,.....she's our newest Model (so to speak!) and we think she looks absolutely divine!   I mean, what girl wouldn't look perfect in pearls at only 4 months old!?
I think I may have to spoil her a bit when it comes to the 'jewelry' side of things as she grows up,...what do you think? 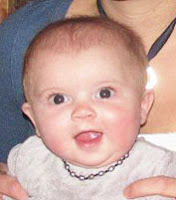 I'm wishing you all a very wonderful, happy, fun, healthy and prosperous 2011!
Until Next Time,
Peace, Love and literally,...."Pearls Baby" !!!
Cheers,
~Shel~
Posted by Shel 4 comments: